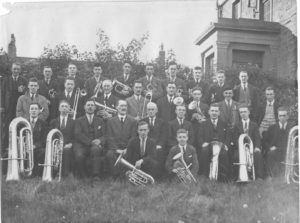 The Instrumental band is one of Arbroath’s longest running musical organisations. It came into existence mainly due to the Horticultural Society’s  annual show , held at Gayfield Park  on August 4th 1893. Incorporate into the show was a brass band contest between 6 bands and the event was described at the time in the Arbroath Herald as ‘ an altogether enjoyable experience for the people of Arbroath .‘

The Gayfield contest sparked off calls for Arbroath to have a band equal to the bands heard on that day and a small outfit with the name of the 1st FAV Band, a military operated group evolved into the newly formed Arbroath Instrumental Band. A plea for any business or local worthies to provide funds to equip the band was issued and two men, Mr Colin Grant of Woodside and MR W.K. MacDonald provided some much needed assistance.

After its foundation the band went from strength to strength, taking part in competitions in the newly formed Northern Counties Brass Band Assocation and the Scottish Brass Band Association competitions and in 1909 the band won promotion into the Championhip section by being placed first out of 25 bands in the Second Section. This meant that Arbroath Instrumental Band was one of the foremost bands in the country.

After the First World War, when contesting was suspended, the band picked up where it left off and in 1920 and 1922 they took third and second place respectively in the Championship Section. This remarkable feat has never been bettered in the band’s history over the last 120 years.  In 1924 a new set of instruments were purchased and a photograph of the band published in the Arbroath Herald at the time showed an all male outfit.

The Depression of the thirties left its mark on the fortunes of the band as well as in the engineering and textile industry in the town but it was interesting to note from the minute books of 1936 that two councillors who were committee members were asked if the could find jobs for the unemployed of the band. Discipline was also a major factor in the organisation with band members being called to explain any non attendance at practices and concerts.

In 1947 Mr Fred Keane the resident conductor died and there followed a series of conductors, with the band bringing in professional conductors for competitions. In 1952, Mr John Boyle who had served as both player and president took over as conductor and was to become the longest serving bandmaster to date.

Under his direction the band had a meteoric rise, when in the sixties they were promoted from Fourth Section to Championship section in just four years. A feat achieved by very few bands, even today.  A blow was struck in 1968 when a compulsory purchase order was placed on the practice hall in Helen Street, which had been the venue for many whist drives, coffee mornings and fund raisers.  A period of temporary accommodation was used in various locations around the town for many years. 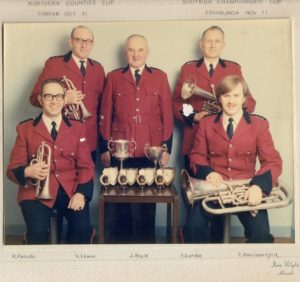 As well as band success a quartet of players from the band won the Scottish Quartet Championships in 1971 and travelled down to Oxford to compete in the British Championships. The quartet comprised of Vic Lewis (cornet), Ray Pattullo (cornet), Ferg Lundie(Horn) and Eddie Harrison(euponium).

In 1978, Mr John Boyle tendered his resignation, ending a 26 year association with the band. The name Boyle, however continued when William Boyle, John’s son took over the reins. After a period of band personnel leaving and retiring and a lack of youth development in place to boost membership, another change of band master was made. Ray Pattullo, a long standing member of the band and local dance band player agreed to take over as conductor in 1982. Ray began teaching youngsters and rebuilt the membership back up to full strength. Over the course of the next 10 years the band saw an increase in membership and young people and travelled to London for the British Championships in 1987 and 1991. Ray’s development of young people made a significant impact on the fortunes and sustainability of the band. Sadly, in 1992 Ray suffered a stroke a during a band practice and despite making a remarkable recovery never returned to conducting, although he did continue to teach young people.

A series of temporary conductors including Ernie Gerrard, long serving member of the band, Jim Ferguson, baritione player with Whitburn Band ( who conducted at the hugely successful Centenary Concert in 1993, and Ann Ness, current deputy conductor.

Due to falling numbers the band found themselves in a particularly lean period however  in 1998 Michael Robertson, a local brass instructor joined the ranks and in 1999 accepted the role of musical director.

Michael was born in Alloa and studied at the Royal College of Music, London, gaining a GRSM (Hons) degree and an ARCM diploma. He remained at the RCM for a further years study which led to him gaining a post graduate diploma in advanced studies.

In recognition of his outstanding work and achievements in the teaching of young brass players, Michael has been awarded the Mortimer Medal for 2011 at a presentation given by the Worshipful Company of Musicians. This was only the second time a Scotsman has received this prestigious award.

Mike has had huge success taking it from fourth section to second section over the course of four years and being crowned Scottish Second Section champions in 2009. This led to promotion to the First Section in 2010. Over that period the band had two trips the National Brass Band Championships in Torquay in 2004, Harrogate in 2009 and most recently in Cheltenham in 2017. The band currently play in the First Section.

The band now has the biggest membership in its long history with upwards of 35+ members plus a thriving youth band which now hosts its own concert every year and has an average age of just 13, but which also boasts a membership of over 30 young players. 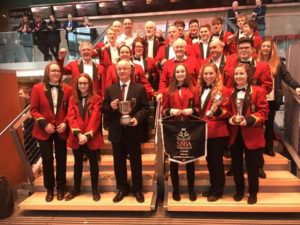 The increasing youth membership can be purely attributed to Mike and it is huge testament to him and his exceptionally high standard of teaching that every year sees at least one youngster from the band goes on to continue their musical education in such impressive establishments as Royal Academy in London, the Royal Colleges in Manchester and Cardiff as well as the Scottish Conservatoire in Glasgow.

In 2011 Ann Ness, the principal cornet player in the band was awarded a lifetime medal from Scottish Brass Band Association for 40 years service to banding, following in her father (Vic Lewis’s) footsteps. The other lifetime member in the band is Bob Johnston (Bb bass player) whose daughter Shirley Bennett and granddaughter Holly Bennett both currently play Euphonium and 2nd Baritone respectively in the band.