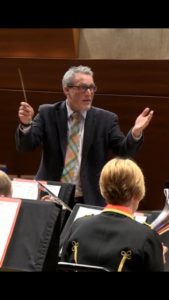 The band and committee are delighted to announce the appointment of Bruce Wallace as our new Musical Director. Bruce began his musical career on trombone with the band in the 1980’s and is a native of Arbroath.  He is a renowned conductor of both wind and brass bands, as well as regular performer in bands and orchestras around the East of Scotland.

Following the departure of long-term conductor of twenty years, Michael Robertson, the band are looking forward to a new chapter with Bruce as conductor.  Bruce’s first concert as MD will be at the Gala Concert on 13th September at 7.30 pm in St Andrew’s church. Tickets available at the door and from band members.

A look to the future….

The band is privileged to have been asked to take part in the 700th anniversary of the Declaration of Arbroath in April 2020. This will involve a accompanying a  choir made up of voices from over 13 Angus choral societies and choirs in the atmospheric surroundings of Arbroath Abbey.  Further details will be published as these become available.